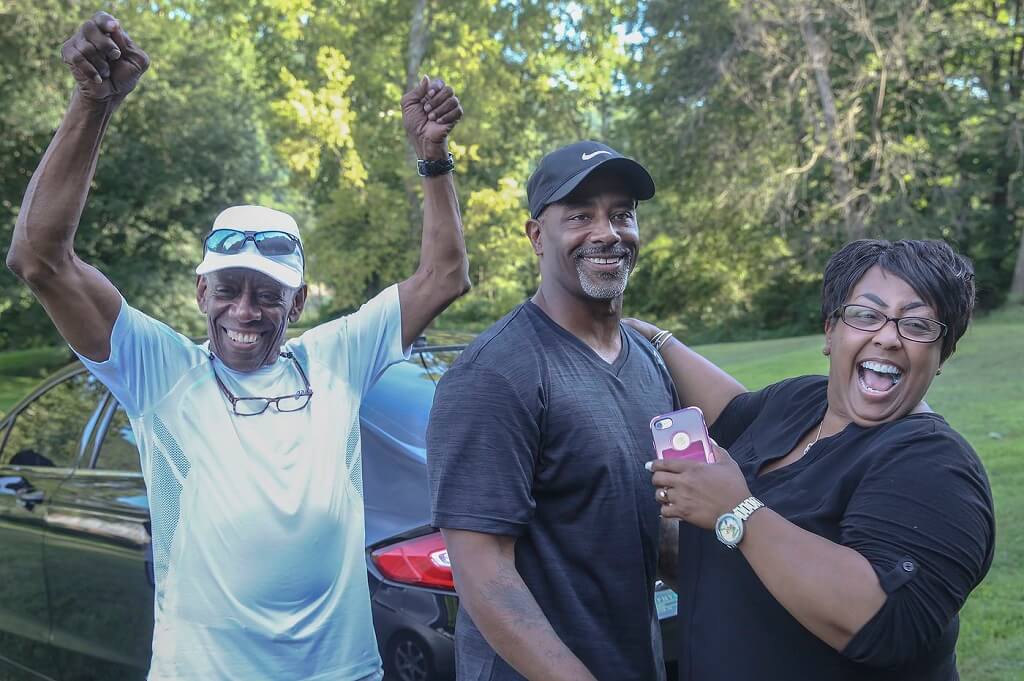 Just before one a.m. on August 20, 1991, 24-year-old Tae Jung Ho was robbed and shot to death as he was walking home with a friend near 22nd and Chestnut Streets in Philadelphia.

Ho’s friend, Junko Nihei, told police that the perpetrators were two black men, one wearing red shorts, and one was wearing a blue hooded sweatshirt.

A taxi driver, Josh Henderson, also told police that he saw a man wearing a blue hooded sweatshirt shoot Ho. He saw the shooter get into a white SUV with four other people. He said the license plate had the letters YZA, but he did not get the numbers. Henderson followed the car for seven blocks and then lost sight of it.

Four minutes later and six blocks from the crime scene, police pulled over a white SUV with a license plate number that started with YZA. The driver was Chester Hollman III. Chester was wearing green pants, glasses, and a hat. According to Chester, the car was a rental that he was borrowing from his roommate. His neighbor, Deirdre Jones, was riding with him. There were no other occupants, nor any weapon, changes of clothes, or evidence related to the crime in the car.

Chester and Deirdre Jones were arrested and interrogated separately at the police station. Chester denied involvement in the crime. Yet, detectives told Jones that Chester had already confessed to being involved in the crime and promised Jones that she would not be charged if she implicated him. Ultimately, Jones gave a statement that she was waiting in the getaway car with another woman while Chester and another man committed the crime.

Chester was tried in April 1993. Deirdre Jones and Andre Dawkins both continued to testify against him. On May 4, 1993, the jury convicted Chester of second degree murder and robbery.

Before the sentencing, Chester learned that the Commonwealth had withheld Dawkins’s full criminal history from the defense, which included convictions for robbery, conspiracy, and filling a false report of incriminating evidence with the police. Chester filed a motion for a new trial, arguing that the prosecution had violated their duty to disclose exculpatory evidence. However, the Commonwealth maintained that they did not know Dawkins’s full criminal history prior to trial. Chester’s motion was denied and he was sentenced to life without parole.

Chester wrote to the Pennsylvania Innocence Project in 2009, and we started representing him in 2013. By this time, new exculpatory evidence had come to light. In 2001, Andre Dawkins had recanted his trial testimony, saying that he never saw Chester at the scene and only identified him because of threats by the police. In 2005, Deirdre Jones had also recanted, saying that she gave a false testimony because police had refused her requests for a lawyer and threatened to charge her with a crime.

In February 2018, the Project, along with co-counsel Alan Tauber of the Law Office of Alan J. Tauber, P.C., asked the Philadelphia County District Attorney’s Conviction Integrity Unit (CIU) to review Chester’s conviction. The CIU agreed and handed over the police and prosecution files for the case.

These files revealed that substantial evidence had been withheld from the defense, including: proof that the Commonwealth knew about Dawkins’s full criminal record before Dawkins testified at trial (which would have impeached him as a witness), as well as information about another credible suspect that the police had investigated, Denise Combs. Within 24 hours of the crime, an anonymous caller tipped off the police that Denise Combs was involved. Denise Combs had leased an identical white SUV with license plate letters YZA during the time of the crime. Police had investigated Denise Combs and her return of the white SUV at 5 a.m., four hours after the shooting, and found out that Jeffrey Green was listed as an additional driver. Green had a prior record of violent crimes. Moreover, Denise Combs’s brother was convicted of two separate third-degree murders. Police interviewed Combs in the days after the murder. Yet inexplicably, the investigation ended there.

In July 2018, the Project and Tauber filed a Post-Conviction Relief Act petition (PCRA) seeking a new trial for Chester in light of this newly discovered evidence. After the CIU’s re-investigation of the case, they joined the Project’s petition to vacate Chester’s convictions. The Court granted the petition, and Chester was released after 28 years in prison. Then finally, on July 30, 2019, the charges against Chester were completely dismissed. At the hearing, CIU director Patricia Cummings said, “I apologize to Chester Hollman. I apologize because he was failed, and in failing him, we failed the victim, and we failed the community of the city of Philadelphia.”

Congratulations to Chester and his family! And many thanks to our former executive director Marissa Bluestine, who fought for Chester since the beginning, and co-counsel Alan Tauber, without whose dedication this would not have been possible.